During fabric manufacture, warp and weft thread systems are crossed at right angles to each other. The warp represents the totality of the threads which run in the longitudinal direction (fabric running direction) during the manufacture of the fabric. The weft, on the other hand, is the totality of the threads which lie in the transverse direction during production. Since the warp yarns are subjected to greater stress during weaving, they are generally stronger than the weft yarns. The warp thread density is also usually higher than the number of weft threads.

The way warp yarns are crossed with weft yarns in a fabric is called weave. The plain weave is the simplest and at the same time also the tightest crossing of warp and weft. Here, each warp thread lies alternately above and below a weft thread. The binding points touch each other on all sides. The binding repeat includes two warp threads and two weft threads. Right and left side of the fabric show a balanced weave. Depending on the type of fiber and yarn, thread density and finish, the plain weave results in fabrics with high abrasion and slippage resistance due to the highest possible number of binding points. They have good particle retention efficiency, but only average cake release behavior. 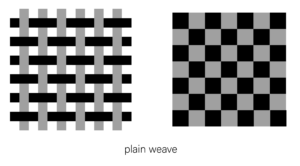 The twill weave can be recognized by the diagonally lined up weave points, which form a twillridge. If the ridge line runs from the bottom left to the top right, the designation Z twill is appropriate. If, on the other hand, the ridge line runs from top left to bottom right, the designation S twill applies. The smallest twill weave comprises at least three warp and three weft threads in the repeat. Floats occur between the weave points, i.e. the warp and weft threads are not bound in over several threads. Warp twill shows more warp than weft threads on the right side of the fabric, where as weft twill shows predominantly weft threads on the right side of the fabric. Depending on the weave and thread density, twill weave fabrics can be soft and loose, but also smooth, dense, and hard-wearing. The cake release behavior is average with good resistance to clogging / blinding at the same time. 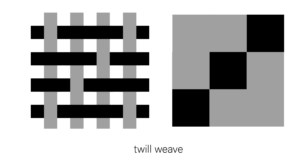 The characteristic of the satin weave is an evenly scattered arrangement of the weave points, they do not touch at any point of the repeat. A repeat includes at least five warp and five weft threads. Each warp thread binds off only once in the repeat, resulting in long floats which also characterize the fabric appearance and properties. The way the warp and weft are tied in creates different fabric faces. The warp satin is determined by the predominance of the warp thread system on the right side of the fabric. In the rarer weft satin, the weft yarns determine the right fabric side. Due to the small number of weave points and the dense thread arrangement, satin-bonded fabrics are smooth, even and shiny. They have good resistance to clogging / blinding and excellent cake release behavior. The particle retention efficiency, on the other hand, is rather average. 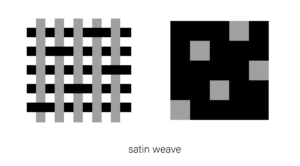 In pile fabrics, a third thread system forms a fiber pile on the right side of the fabric. Pile fabrics with a pile height of up to 3 mm are called velvet, while those with a higher pile are called plush. According to the manufacturing technique, a distinction is made between warp and weft velvet. In warp velvet fabrics the pile is formed by an additional warp and in weft velvet by additional weft threads. We are interested in warp velvet where an additional pile warp is bound into the base fabric and the pile naps are bound at the weft. Depending on the production, a distinction is made between rod velvet and double velvet. The double velvet technique is of primary economic importance and is relevant for us. Here, two fabrics are produced on top of each other on a special weaving machine, which are connected to each other by a common pile warp. By means of a reciprocating knife, the pile yarn is cut in the middle. Five thread systems are used to produce two fabrics with three thread systems each.

Fiber composites, as the name suggests, are textile surfaces formed directly from fibers, by passing yarn formation. Depending on the type of bonding, a distinction is made between two groups of fiber composites: felts and nonwovens. A prerequisite to produce fiber composites is always the formation of a fiber pile, which must then be consolidated. In the case offelts, bonding takes place mechanically. In the case of nonwovens, bonding can be chemical (binder or solvent), thermal (fusion fibers based on bicomponent fibers or welding points based on thermoplastic fibers) or mechanical (needling, water jet process). A combination of several processes is also possible in individual cases.